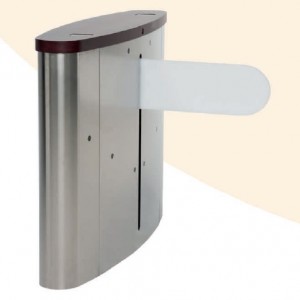 It is based on the system remain unobstructed corridor functions controlled by photo-electric cells, being able to install on any access area under surveillance.

The system consists of a specially designed cabinet with top cover wood with tinted s / sample. The corridor is closed by a panel of SECURITY glass that leaves inside and carries the closure operating as follows:

The panel is always up blocking the way and one withdrew tilting down it and hiding it in the cabinet when it receives an access authorization signal from a reader or push button, allowing a person goes through and resealed photocell after carrying out the same.

If two people want to enter at the same time the system will sound an alarm to detect intrusion. As a security measure the portillo has a system of photo cells that prevents the panel is lifted and the user can hit it standing in the corridor.

Top cover made of wood tinted/s sample, there is the possibility of manufacturing in PUR painted according to the RAL, practicable and hinged security locked through wich you access inside.

There is the possibility of manufacturing of stainless steel.

Adaptation of readers or control elements on the ends of the unit as they are fitted on the surface or the inside of the bodywork, depending on its dimensions and characteristics.

Mechanism adapted to a determined operation, with a positioning and damping system for the panel, with a safety system in case of emergency. Treatment of the components and greased bearings are for the whole life.

Floor mounting using base plates fixed with screws and expansion plugs, supplied with the unit.